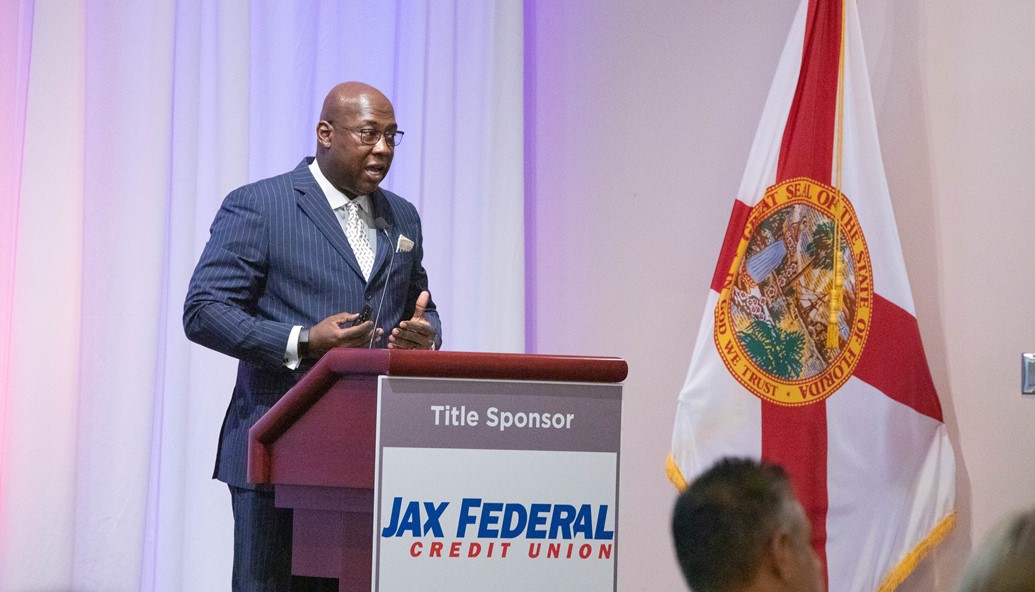 However, while Jacksonville has a lot of advantages, there are areas that need improvement, Wallace said in a March 31 webinar for the NAIOP Commercial Real Estate Development Association Northeast Florida Chapter.

“Diversity is something that we’re geared toward,” he said.

“We want to make sure that everyone prospers in this economic ecosystem of Northeast Florida.”

The Adecco Group’s recent announcement that it is moving its North American headquarters from Jacksonville to Atlanta highlighted the issue.

Wallace said Adecco cited airline access as one of Adecco’s concerns, with so many more direct flights available to and from Atlanta than Jacksonville.

“They also felt from a talent diversity aspect, they were going to be able to hire talent” in Atlanta, he said.

JAXUSA is taking steps to improve diversity in hiring in the region, Wallace said. Last year, it hired Angela Timberlake as vice president of Elevate Women, and the JAX Chamber Foundation launched the Lewis and White Business League to promote opportunities for African Americans.

Even while it seeks improvement, Wallace said data shows more people are moving to Jacksonville than other cities to seek opportunities in the pandemic.

The only major U.S. metropolitan area with a bigger gain was Salt Lake City at 12.3%.

“You saw people making decisions about where they wanted to live,” Wallace said.

“You’re seeing great, great interest in moving to our region.”

JAXUSA, the economic development division of the JAX Chamber, is working on 58 potential projects that could bring in 3,300 new jobs to the region, Wallace said.

“We’ve got 22 projects that are very hot right now,” he said.

While businesses were shutting down because of COVID-19 last year, Northeast Florida still saw 16 expansion or relocation announcements that will generate 2,500 jobs and $857 in capital expenditures, Wallace said.

Jacksonville’s February unemployment rate of 3.7% was lower than any other major metropolitan area in Florida.

“I think our strategic plan is better than any of the other regions within the state,” Wallace said.