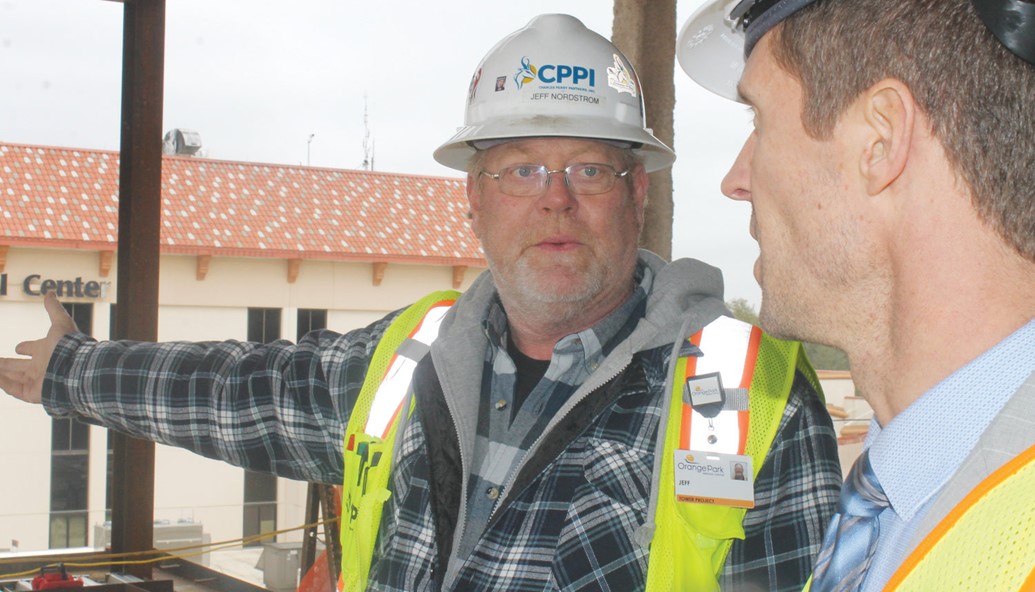 Concrete is poured in the middle of the night so it won’t affect traffic. Workers punch the clock at daylight and don’t leave until dark, always being mindful of approaching ambulances and an emergency room that’s just a few feet away. And the man who operates the 178-foot crane starts his long climb up the ladder at 6 a.m. and he doesn’t come down or take a break for 12 hours.

“We’re pushing hard to get our schedule in,” said Jeff Nordstrom, the superintendent of operations for Charles Perry Partners, Inc. “Actually, we’re about two weeks ahead of schedule, which is quite an amazing accomplishment considering all the rain we had [in early January].”

The $126 million project includes a five-story tower that’s sandwiched between the hospital’s main entrance and the emergency room. Although work started on the expansion last June, the reception and registration area on the first floor are expected to be opened as soon as March, COO Mike Nordness said.

The second and third floors will be empty spaces for future expansion, while the fourth and fifth floors will expand the hospital’s bed count by 48.

“We can put the patients on the top floors so they won’t be disturbed while they work on the lower floors,” Nordness said.

While Nordness said he wants to open all five floors “as soon as we can,” OPMC is shooting for a grand opening in December.

That will require Nordstrom’s group to stay busy.

“Right now, we have about 90 a day working here,” he said. “We’re pouring concrete at 1 a.m. so families aren’t bothered by the big cement trucks during the day. We have to work over the emergency room in very small stages, about 20 feet a day, so we don’t get in the way. When you’re cutting into an existing building, your major concern is keeping everything dry. You can’t have water intrusion because you can’t interrupt service. We’ve been careful to keep everything running smoothly.”

That means turning the giant crane away every time the emergency helicopter lands, and making sure materials aren’t being hoisted to the roof while EMTs unload patients from ambulances.

Nordstrom said most questions about the project are directed toward the giant yellow crane.

“The guy up there doesn’t come down in his 12-hour shift,” he said. “It’s quite a job. He can place a beam less than an inch from where they need it. It’s really impressive.”

On a clear day, the crane operator can see for more than 25 miles.

The original crane was limited to 134 feet during hurricane season. Once that threat ended in November, the company added another 44 feet to finish the work on the top floor.

“We’re getting the shell up inside pretty quickly,” Nordstrom said. “We will go to 150 [workers] once the walls go up. That’s when things are really hopping.”

OPMC hasn’t decided if the extra beds will be dedicated to a specific healthcare need, Nordness said. That means the hospital will have considerable flexibility to react to public needs.

“We look forward to all of the new rooms with the new services we offer,” said Dr. Kasia Walosik, an anesthesiologist. “We hear a little construction during the day, but it hasn’t bothered us. Nobody has complained. We can’t wait to see what it looks like when it’s done.”

Learn more about the booming Healthcare and Life Sciences Industry in Clay here.