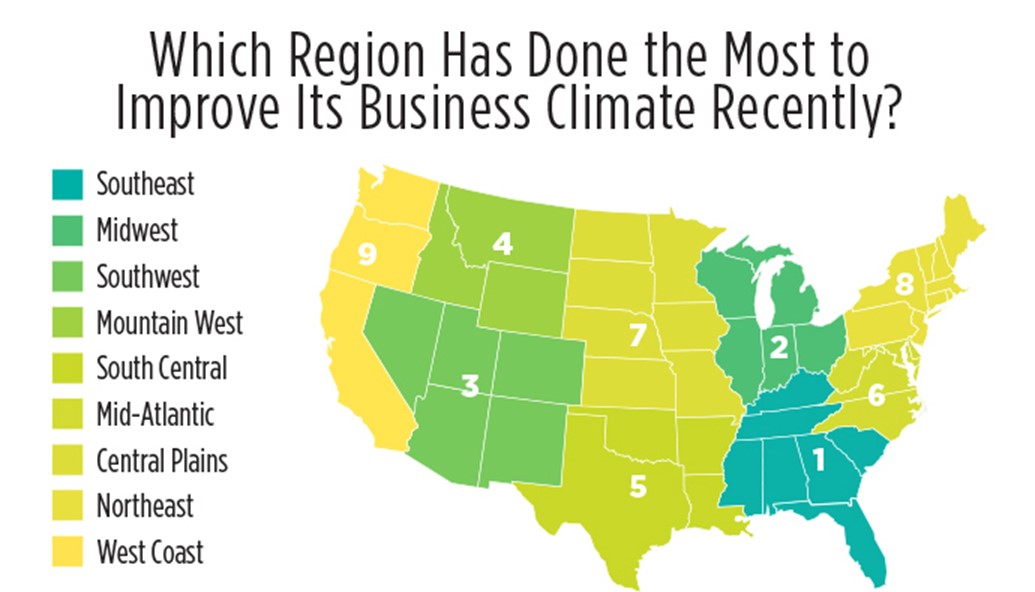 If you need to see evidence that the American economy is on a sustained upswing, look no further than the results of Site Selection’s annual site selectors survey.

Coming off a highly productive 2019 that saw a flurry of corporate expansions, particularly in the last quarter, the site selectors we surveyed expressed optimism on several topics, but they were especially bullish on the Sun Belt and industrial growth.

When asked to select the region that had done the most to improve its business climate in recent years, the site selectors picked the Southeast as the most improved region, followed by the Midwest and Southwest. The Mountain West came in fourth, just ahead of the South-Central region of the country.

In terms of individual states, North Carolina garnered the No. 1 most improved business climate spot, with 10 total votes, while Arizona and Tennessee tied for second with nine votes each. Rounding out the top five were Texas and Virginia, tied with eight votes each, just ahead of Michigan and Ohio, which garnered seven votes apiece.

When asked to name the industry sectors that are showing the most expansion activity right now, site selectors picked distribution and logistics projects as the leading sector, with a total of 33 votes, followed by advanced manufacturing with 22, food processing with 18, biomedical and health care with 17, and data centers with 16. Headquarters and back-office projects finished just out of the top five sectors with a total of 11 votes.

Site selectors had a lot to say when it came to dealing with economic developers and the government jurisdictions they represent. Asked to name the most common deal-killers, respondents listed lack of responsiveness and poor governmental leadership as the top deal-breakers, with a total of 24 votes. Lack of buildings and sites came in second with 17 votes, followed by lack of skilled workers with 14. Rounding out the list of top five deal-killers were breach of confidentiality (eight votes), followed by lack of infrastructure (seven votes).

We also asked respondents to give us the one policy recommendation they would most advocate to a state or community. Improving incentives came in first, chosen by 44% of the site selectors, followed by implementing better permitting procedures and offering more workforce training help, which each garnered 10% of the votes.

The respondents’ comments on these topics were just as telling. Among the write-in votes on the most common deal-killers were these:

On the subject of policy recommendations, some of the respondents suggested these:

When asked to evaluate what they most want to see on an EDO website, respondents gave the highest value to name and contact information, scoring it a 4.09 on a 5-point scale. That topped the second highest-rated item, accurate and up-to-date data, which secured a rating of 3.89, followed by news on recent projects (3.79) and available buildings and sites (3.74).